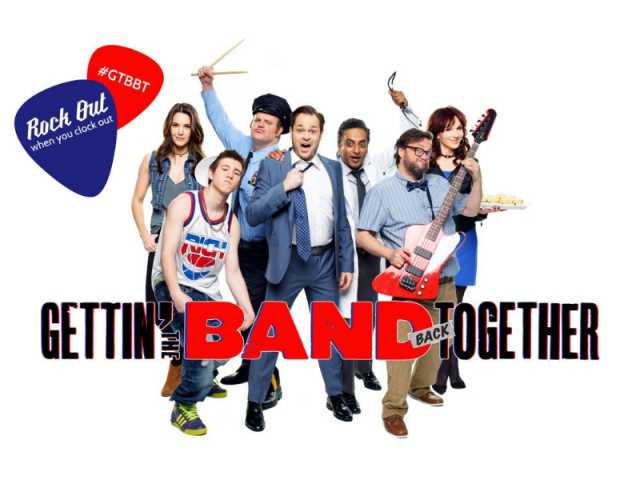 Welcome Back to “Steve Goes To Broadway”. This is Part 3 of my investing adventure along the “Great White Way” so-called because it was one of the first streets in the US to be lit with electric lights. In Part 1 of my adventure, I wrote about my interview with Ken Davenport, a successful and well-regarded Broadway veteran producer. I then decided to try my hand at a small investment in his latest production called Gettin’ The Band Back Together.

On Winning A Tony

A few weeks later, I was entirely surprised and delighted to hear that Ken won a Tony Award for his current Broadway Show, Once on This Island. Things were now getting interesting. Would his next show about this band getting back together be as successful? Would I, the novice first-timer, be a part of a great Broadway hit? Visions of Hamilton danced in my head. Whoa, I better slow down and get a hold on myself. Back to the Tony Award. Well, it just so happened that I knew a talented actress who had won a Tony some years ago, so I called her and asked if she would come on air to tell what it was like and how, and to what degree, it had changed her career. So Part 2 of Steve Goes To Broadway was created.

Alright, fast-forwarding to the present, opening night, August 13th at the Belasco Theater in the heart of Broadway. We arrived a few days early to visit friends and family and I snapped a pic as I Ubered to the Producer’s office to pick up my tickets.  The producer’s 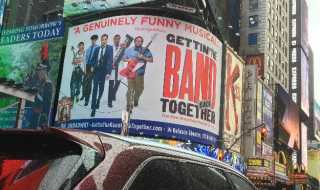 office is right in the heart of Times Square which, of course, makes all the sense in the world, but it reminded me of the small town nature of the Broadway community. So much concentration in just a few streets and avenues.

Opening night was a hoot. The theater was filled with many well-wishers, investors like myself, other producers, Broadway veterans, and critics. (More on the critics later). Producer, Ken Davenport, spoke at the beginning stressing how the script, the music, and the entire production were entirely original (apparently, a rare thing on Broadway these days) 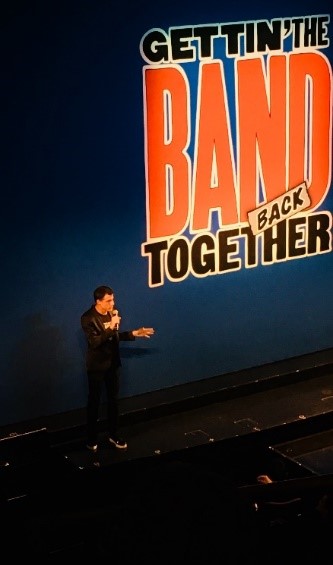 Lights down and the play began with a fun song, setting up the main character and the precarious situation in which he found himself having just lost his job on Wall Street and fretting over whether he should move home to live with his mother in New Jersey.

From that moment on, the play kept up a steady pace of jokes, music, and comic situations which delighted the audience at every turn.

Standing ovations were the result of all this frolicking, and we all headed to Dave and Busters a few streets over for after-party food and drinks. Actually, Dave and Busters was a good choice considering that the play’s main characters are just regular folks located as they say in the show, “in Western Eastern Central Middlesex County, New Jersey”.  There was a live band there which makes total sense considering the Play’s title, Gettin’ The Band Back Together and food and drinks were plentiful and free while hundreds of people milled around hoping for a glimpse of the cast members and stars of the show which included Marilu Henner, the actress from the TV show Taxi, and many other movies. Unfortunately, Marilu and other stars were cordoned off in a separate room for pictures and interviews, so I never got the chance to say hi.

We hung out for a while and headed back to the hotel.

Next morning at breakfast, we quickly picked up the New York Times and searched for the review. Unfortunately, the review was less than favorable. Actually, it was scathing. It pointed out many of the aspects of the show—which I didn’t even notice—lighting, costumes, stage design, for example.

Well, I thought, this is the reason I got involved, to follow the ups and downs from an insider’s vantage point and to see how the process, good or bad, unfurled. Luckily there were good reviews too, from Variety and others media outlets, but the New York Times review had a particular sting.

Well, guess what? Minutes later, I received an email from Ken the producer, addressing the review. Wow, I wondered what he could possibly say about this review to all of his wishful investors and actors? He got to the point immediately.

He wrote: “I’ll be honest, the critical response was not what we had hoped . . . but that said, it is also not unexpected.  Our show never intended to be The Iceman Cometh . . . it was built to do what musicals were originally designed to do . . . to entertain, and to allow our audiences to escape from everything else going on in their lives and in the world.” The show’s audience demographics are not the same as the critics, he went on to say, and incredibly successful shows like Thoroughly Modern Millie, Jersey Boys, even Les Miz opened to reviews that weren’t what the producers had dreamed about. Plus, he continued, there are tons of shows with great reviews that were never commercially successful.

And finally, he went to say, while initially, the road will be a little bumpier than hoped, they are counting on word of mouth to get them thru the slow summer season. 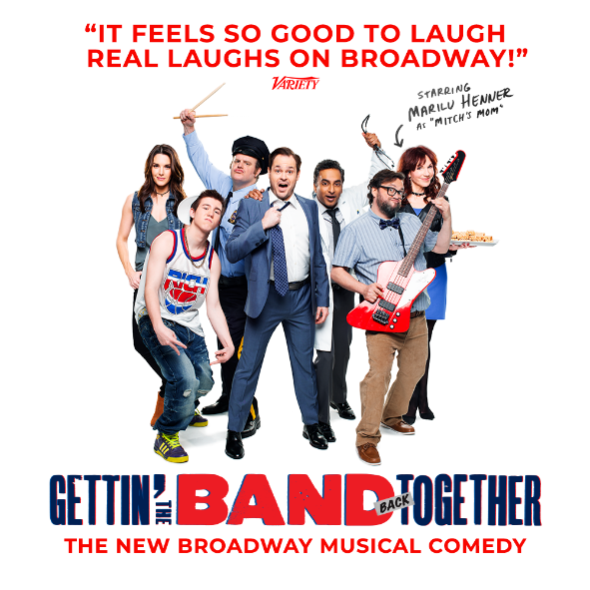 But there was more to come. The updates kept coming….

Here’s a highlight from an August 20th email: “Last week (opening week) was obviously a challenging one. A couple of performers got bronchitis and were out for a couple of shows, but now they’re back!

Special 2 for 1 tickets did raise the audience count and a heavy TV commercial schedule, as well as a large direct mail drop, will attempt to break through those no-fun critical reviews.

Upbeat as always, Ken is telling us that the audience continues to have a blast, and he received several emails from major industry heavyweights (including several Tony winners) telling him how much they loved the show.  And social media response has been terrific, he said.

But now, more than ever, they were working hard to get through the typically slow summer, and all hands were on deck to promote and spread the word.

In addition to the doubling down of traditional advertising, he said they have also put a bunch of grass roots initiatives in the works, like . . .

Then a few days later some bad news: Losses have been more significant than projected and waivers and deferrals have gone into effect to conserve cash.

Some good news: They are recording the cast album which they hope will help them build a merchandise income stream.

So now we hold our breath, hoping to pick up some steam from the sum of all their efforts.

Until next time, remember to visit stevepomeranz.com to see my posted pics from my NY trip and stay up with our Steve Goes to Broadway series and much, much more. That’s StevePomeranz.com.

This commentary contains the author’s personal opinions about his Broadway experiences. United Capital Financial Advisers, LLC (“United Capital”) provides financial life management and makes recommendations based on the specific needs and circumstances of each client. It has no experience with such investments; nor does it recommend that any United Capital client invests in alternative investments in the entertainment industry, including Broadway plays, such as the one discussed in this commentary. For clients with managed accounts, United Capital has discretionary authority over investment decisions. Investing involves risk and clients should carefully consider their own investment objectives and never rely on any single chart, graph or marketing piece to make decisions. The information contained in this commentary is intended for information only, is not a recommendation to buy or sell any securities, invest in any alternative or private offering of securities in the entertainment industry and should not be considered investment advice. Please contact your financial adviser with questions about your specific needs and circumstances.