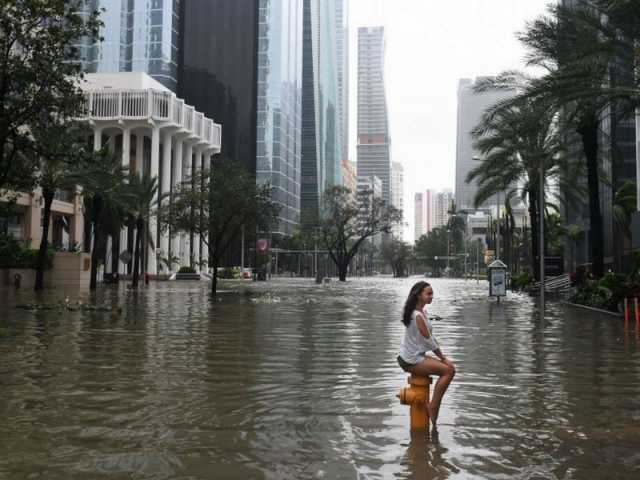 It’s good to be back on air after Hurricane Irma.  And it’s good to see life slowly limping back to normal in Florida, but it’s also heart-wrenching to see how many people’s lives have been impacted by the storm and the destruction it left in its path.  Today, I plan to talk about Irma’s economic impact on Floridians and on the State as a whole.

As most of you know, Hurricane Irma made landfall on Florida’s Cudjoe Key at about 9 AM on Sunday, September 10 and caused a fair amount of damage across Florida before moving on to Georgia, South Carolina, and the southern parts of North Carolina and Tennessee.  Clearly, Florida was the worst hit on mainland USA.

Within the U.S., the Florida Keys suffered the most with 1-in-4 buildings destroyed, 2-in-3 buildings significantly damaged, and 90 percent of all homes impacted in some form or another.

While we here in Boca Raton were lucky that the storm shifted course and moved west, the islands of Barbuda, Saint Barthelemy, Saint Martin, Anguilla, and the Virgin Islands really bore the brunt of Irma’s fury as a Category 5 hurricane, with catastrophic damage and loss of life.  And as we speak, Puerto Rico and the Dominican Republic and other islands have truly been devastated by Hurricane Maria.

Getting back to Irma. Luckily, there was a silver lining—the storm and the damage it caused was not as bad as meteorologists had initially projected. Irma had weakened to a Category 3 storm by the time it made its second landfall on the southwest coast of Florida and had further weakened to a Category 2 storm when it hit farther north in Naples, Florida.

Even so, it still delivered 100 miles-per-hour winds, caused storm surges that flooded streets and homes, downed a couple of high-rise construction cranes in Miami, damaged power lines and mobile phone towers across the state, and resulted in loss of power to about 4.9 million homes and businesses.  Irma also disrupted Internet access, caused water supply and sanitation problems, heavily damaged Florida’s citrus and sugarcane crops, and closed most Florida airports.  At one point on Sunday afternoon, there were literally no flights over Florida’s airspace!

So let’s talk about Irma’s economic impact.  Preliminary estimates suggest that Irma could cost anywhere from $50 billion to $190 billion, depending on who you talk to—and could knock off 0.6 percent to 1 percent from U.S. GDP growth in the third quarter.  That’s a massive price tag compared to past storms.

But I know the U.S. will recover from this temporary dip in GDP growth because our economic fundamentals are strong with good job growth, rising consumer spending trends before Irma struck, a strengthening global economy, rising corporate profits, and healthy financial markets. So, hopefully, this will be a blip on the big picture of America’s economic growth.

Within the state, Florida’s tourism industry took a hit as tourists canceled trips ahead of the storm.  Additionally, the ratings firm Moody’s projects a 12% drop in citrus production and a 10% drop in the sugarcane crop due to storm damage; moreover, much of the temporary housing that hosts seasonal farm workers was destroyed or damaged, so the state’s $8 billion agricultural sector has taken quite a hit.

With competing demands for reconstruction funds from schools, social programs, and infrastructure projects—Florida’s state budget will be severely stretched through 2020.

In my research on Irma’s economic impact, I came across a list of the 10 costliest Atlantic hurricanes and noted that hurricane costs have risen steeply over the past two decades.  For example, the economic damage from Hurricane Ivan in 2004 was about $14 billion, Hurricane Katrina in 2005 cost $62.2 billion, and Irma is expected to cost at as much as $190 billion on the high end of estimates even though it was only a Category 2 storm by the time it hit mainland Florida.

So I did some digging and found that there are two main reasons behind the sharply rising economic costs of hurricanes.

The first is supposedly and in many quarters, arguably, Climate Change, which many meteorologists forecast to bring deadlier and more frequent storms and extreme weather events, of which Irma is only the beginning—or at least, so they say.

The second reason that Irma’s economic impact is so high is the unrelenting increase in Florida’s population.  Demographers estimate that Florida’s population grew by about 1,000 residents per day, with 333,500 new Floridians added in 2016 alone—that’s more than the population of St. Louis, Missouri. So it’s like we’re adding a small mid-western city to our state every year!  I guess it’s the allure of lower taxes, sunshine, and easy living, and it will continue to attract more people in the years to come.

As a result, our cities are getting jammed, and people who can’t afford to live in cities are building homes and commercial structures in inland areas that are more susceptible to flooding and wind damage.  So the next time a storm hits, there will simply be more people and more businesses that will be impacted, and the economic costs will continue to rise.

A 2013 World Bank survey of “Which Coastal Cities Are at Highest Risk of Damaging Floods?” found that Miami was ranked #2 and Tampa was ranked #7 for flood damage from rising sea levels and storms.  So as people flock to places like Miami and Tampa, these cities will build more high-rises, and stricter building codes will require that they also build better defenses such as dikes and sea walls. This is all well and good for peace of mind, but if those defenses fail, a lot more people will be impacted, and overall economic losses will be even steeper.

Here’s another thing to think about: If a Category 2 storm could cause so much damage, what would happen if we take a direct hit from a Category 5? Imagine the consequences!

Many Floridians Without Flood Insurance

Storms, of course, have a big impact on the insurance industry, so expect to see premiums go up over the coming years for home insurance, car insurance, flood insurance, health insurance, etc.

But on a more personal level, less than 18 percent of Florida’s homeowners have flood insurance, so a lot of people will have to pay for repairs and damages from their own pockets, and that could lead to a fair amount of borrowing, adding to household debt burdens. Storm repair costs could also take a big bite out of discretionary consumer spending, with fewer trips to malls, restaurants, and local attractions, which might hurt the retail economy. Additionally, people may not have enough money left over to add to their retirement savings and investments. So 2017 could see a downward blip on how much Floridians save and invest, resulting in a domino-effect that will take a while to recover from.

The storm is also expected to temporarily raise grocery, gas, and building material prices, increase the price of items typically shipped in and out of Florida’s ports and result in a construction backlog as people rush to recover from the storm. So with the limited supply of repairmen, your own recovery may be slower than you’d like.

I just want to add: With all the economic havoc that Irma has caused to many people’s finances, it’s all the more critical that you consult a financial advisor so you know which investments to break if you need the money and which ones to not touch, which loans to take on and at what terms, how to make sure you continue to pay for vital expenses such as mortgages, tuition, and so on. The bottom line is you want to simply make the right decisions at an important juncture like this. Mistakes made today can affect you and cast a financial shadow for many years to come. It’s vital to not let panic and fear dominate your financial decisions.

Opinions expressed are those of the author’s and not necessarily United Capital. Investing involves risk and investors should carefully consider their own investment objectives and never rely on any single chart, graph or marketing piece to make decisions. Content provided is intended for informational purposes only, is not a recommendation to buy or sell any securities, and should not be considered tax, legal, investment advice. Please contact your tax, legal, financial professional with questions about your specific needs and circumstances.
The information contained herein was obtained from sources believed to be reliable, however, their accuracy and completeness cannot be guaranteed. All data are driven from publicly available information and has not been independently verified by United Capital.
Certain statements contained within are forward-looking statements including, but not limited to, predictions or indications of future events, trends, plans or objectives. Undue reliance should not be placed on such statements because, by their nature, they are subject to known and unknown risks and uncertainties. Opinions expressed are current as of the date of this publication and are subject to change.
Sources:
https://en.wikipedia.org/wiki/Hurricane_Irma#Mainland_United_States_2
https://www.worldbank.org/en/news/feature/2013/08/19/coastal-cities-at-highest-risk-floods
https://www.vox.com/explainers/2017/9/18/16314440/disasters-are-getting-more-expensive-harvey-irma-insurance-climate
https://www.nbcnews.com/storyline/hurricane-irma/why-irma-s-impact-economy-will-be-worse-harvey-s-n801696
https://www.cnbc.com/video/2017/09/11/morgan-stanley-on-economic-impact-of-hurricanes-harvey-and-irma.html
https://www.cnbc.com/2017/09/13/the-hurricanes-will-have-a-significant-negative-impact-on-third-quarter-gdp-growth.html
https://www.usnews.com/news/articles/2017-09-11/irma-harvey-forecast-to-do-290-billion-in-economic-damage
https://www.ft.com/content/5fb63590-94d8-11e7-a9e6-11d2f0ebb7f0
https://www.miamiherald.com/news/weather/hurricane/article173514401.html
https://www.news-press.com/story/news/2017/09/15/hurricane-irma-expected-batter-boost-floridas-economy/659815001/