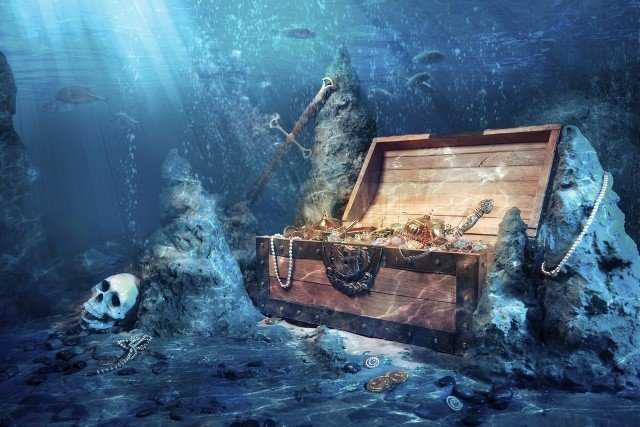 Hedge funds, private equity firms, and affluent individuals have long provided funds to back recovery expeditions. Of the half-dozen or so public companies in the treasure-hunting industry, most trade over the counter. And Tampa, Fla. based Odyssey Marine Exploration, which trades on the Nasdaq, is one of the more prominent public companies in this space. In 2011, Odyssey found a sunken British merchant ship 300 miles off Ireland’s coast and recovered more than 110 tons of silver ingots from the vessel. Under its agreement with the British government, Odyssey received 80% of the net value of the silver it had recovered, which totaled about $210 million.

Then, earlier this year, Microsoft co-founder Paul Allen (whose net worth runs into a few billion) invested in an expedition for the deep-sea discovery of one of Japan’s largest World War II battleships.

So does this signal that it’s time for wealthy clients to consider investing in shipwreck search and recovery?

Well, not quite, because while shipwreck treasure hunting sounds exciting, it almost certainly is a particularly treacherous investment. Partly because the low-hanging fruit has already been plucked…that is, the shipwrecks in shallow waters that have already been found. So recovery operations are now moving to deep water, which is way more expensive to explore.

Moreover, Paul Allen’s expedition isn’t driven by a profit motive, but by the urge to locate and document historical wrecks. Treasure-hunting hasn’t returned a profit to investors since the 1980s and bountiful recoveries are getting more and more rare, making treasure hunting more of a deep-sea lottery than a formula for investment success.

So don’t be fooled by the investment marketing literature, which will tell you that trolling the world’s oceans for sunken treasures can be a lucrative undertaking, with over 3 million undiscovered shipwrecks scattered across the world’s seabeds, with a combined value of hundreds of billions of dollars. And experts say only about a hundred shipwrecks might have carried cargoes worth $50 million or more.

Moreover, these projects require tens of millions in initial investment with little guarantee of success. So firms that specialize in ambitious expeditions for the recovery of sunken treasures are now diversifying their operations and using their assets to focus on more reliable projects, such as seabed mineral mining, that offer better risk and reward characteristics more akin to traditional mining ventures.

For example, a typical deep-sea search and recovery operation requires large vessels loaded with expensive technology such as multi-million-dollar underwater robots, small submarines with arms that can grasp and hold objects, state-of-the-art deep-sea cameras, and more. These ventures also depend on weather conditions and can often be very lengthy—sometimes spanning 10 to 15 years.

Payoffs Are No Longer Attractive Or Guaranteed.

Local and international laws vary in the degree to which treasure hunters must share recovered items with governments. In 2007, a recovery vehicle called the Odyssey recovered an estimated $600 million in gold and silver coins from the Spanish galleon Nuestra Señora de las Mercedes, which sank in 1804 in international waters about 100 miles west of Gibraltar. But the victory was short-lived because the government of Spain filed claim to the treasure and everything was returned to Spain, including 17 tons of coins. So imagine how bummed you’d be if you’d invested tens of millions in the Odyssey project.

Case in point: A treasure hunter named Tommy Thompson discovered the S.S. Central America in 1988 and recovered part of its booty after raising almost $22 million from investors. He then sold the three tons of gold and other treasure he recovered from the ship for more than $50 million… but his investors received nothing, and, of course, several sued. Thompson spent more than two years on the run living a lavish cash-only existence until a warrant was issued for his arrest, and he was apprehended in January at a Hilton hotel in Boca Raton, Fla.

A new challenge has encroached upon the bounty hunter’s booty. Bounty hunters are now under pressure from archaeologists and conservationists who argue that profit-seeking treasure hunters can’t or won’t comply with the highest ethical and archaeological standards, which can result in their damaging the cultural and academic value during underwater treasure recovery. Opponents of “for-profit” recovery operations say that careful excavations cost more, which lowers returns for investors.

Given the myriad risks and fleeting rewards of investing in this business, it may be safer for investors who want to experience the thrill of shipwreck hunting to instead support non-profit organizations that perform marine archaeological research. One such organization is the RPM Nautical Foundation based in Key West, Fla. Donations are tax-deductible and donors often get opportunities for sightseeing, diving, and photographing historic wrecks.

The founder of RPM Nautical, a former Wall Street trader, says he looks for artifacts because it’s fun. He put his yacht to use, not to grab souvenirs, but to document and illuminate history. As he puts it, “Since treasure hunting investors don’t get to be there when the stuff is found, they’re missing out on the adventure.” And he’s pleased that the Roman vases and helmets his team has recovered are now on display for the public to enjoy.