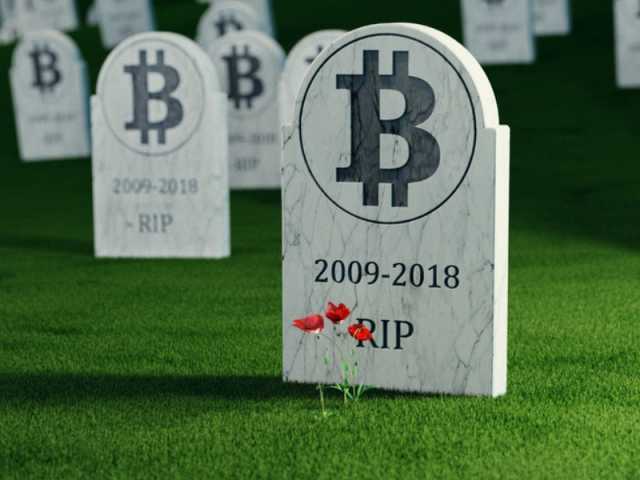 But never mind that… moving on:

In January 2017, a Bitcoin was trading at about $1,000.  Then, speculators world-wide got into the game and pushed Bitcoin’s market price all the way up to almost $20,000, for a 20-fold increase in less than a year.  On the way up, some people made boatloads of money.

But, boy, what a difference a year makes!

Today, a year from that near-$20,000 high, Bitcoin’s market price has dropped about 80%, to under $4,000.  Those foolish enough to buy near its high, or on supposed dips on its way down, have lost a lot of money, with little hope of Bitcoin ever recovering.

And it’s not just Bitcoins.  There’s a website called Dead Coins that has a long-list of cryptocurrency wannabes that tried but failed, and do not exist anymore. Actually, 182 listed were scams, 680 are deceased, and 12 were outright hacks to deliver malware to your computer and 60 were parodies like the Lebowski coin and the SupercalifragilisticexpialidociousCoin)

For those of you who are interested, I’ve included a chart on Bitcoin’s rise and fall on my website, StevePomeranz.com, along with a link to the Dead Coins website.

When I look at the Bitcoin chart, I am reminded of the dot-com boom and bust where quite a few companies – with no revenue whatsoever, highly questionable product strategies, and steep losses – traded up to billion-dollar valuations based on pure hype.  When sentiment turned south, a lot of those valuations turned to smoke, and hundreds of dot-coms went out of business, never to rise again… much like what may happen with Bitcoin.

On the flip side, I look at the severe crash of October 2007, when stock and real-estate valuations tanked because the economy took a nosedive.  And I see what happened after March 2009, where stocks and home prices rallied past levels seen before the crash.  And I think to myself, the rally after 2009 was almost a given because overly fearful investors had abandoned companies that were intrinsically solid and were bound to bounce back… which they did, spectacularly, over the past nine-plus years of the market’s rally.

So how do we make sense of Bitcoin’s volatility, and what’s really behind its sharp fall?  To get some insights, I turned to a Forbes article titled The Cryptocurrency Paradox And Why Crypto Is Failing.

As the article’s author, Jay Adkisson, explains, here is why crypto is failing.

#1 It’s Not A Revenue Producing Asset

Even Warren Buffett famously dismissed Bitcoin as an investment in a 2014 interview with CNBC.  He compared a Bitcoin transaction to the modern day equivalent of writing someone a check or sending a money order.  And he told investors, “Stay away from it. It’s a mirage, basically…The idea that it has some huge intrinsic value is a joke in my view.”

Back then, there were many who thought Buffett simply did not understand this brave new technology and called him out on it, but the Bitcoin’s 80% crash proved that Buffett was right all along.

Cryptocurrencies have no intrinsic value, they provide no income stream, and aren’t backed by a reliable entity or government.  So it’s virtually impossible to compute their value other than from supply and demand dynamics.

Bitcoin’s rise and fall also reminds me of the Dutch Tulip Mania of 1637.  Back then, tulip bulb prices reached extraordinary levels, then crashed, and economists now regard the tulip mania as the first recorded speculative bubble.

#2 Cryptocurrency Is Not A Commodity

A commodity, like oil or wheat, is something that is consumed and needs to be replaced with new stock.  One could perhaps argue that tulips had some commodity-like value for use in gardens, decorations and such-like, but cryptocurrency isn’t even a commodity. A Bitcoin, for instance, isn’t destroyed in a transaction but can be re-used over and over.

Just looking at the Bitcoin’s price chart over the past year illustrates that a thousand dollars invested in n December 2017 is worth about $200 today.  Clearly, it isn’t a dependable store of value.  Unlike companies which may grow their earnings over time, a Bitcoin produces nothing, so don’t expect its value to miraculously increase over time.

Cryptocurrency Is A Currency, And No More

Simply put, cryptocurrency is a digital currency that can be used to exchange goods and services.  And while its underlying blockchain technology appears very promising for a range of secure applications, don’t forget that your credit card also represents a purely digital transaction that has been around since the 1950s!

Credit cards, however, deal in local currencies such as the dollar and the euro, whereas cryptocurrency exchanges involve the currency itself.  So if you buy a latte, you pay for it in, say, Bitcoin everywhere across the globe – making it a currency in and of itself.

Here’s another nice thing about credit cards.  If your card is stolen, the issuer will make you whole if you report the theft on time.  If your Bitcoins get digitally stolen, you have no one you can turn to, to immediately put your mind at rest.  A Japan-based cryptocurrency exchange learned this the hard way when it was hacked and lost about $60 million worth of cryptocurrency, including 5,966 bitcoins.

But No One Guarantees Cryptocurrency

Another thing that makes a cryptocurrency different is that it isn’t backed by any central bank, or the full faith and credit of any government, or even a commodity such as gold.  It’s completely independent and autonomous across the globe.  That, of course, is also part of its appeal, as I noted in my earlier commentaries on Bitcoin.  But it’s also what makes it so volatile and unreliable.

In fact, just last week, I spoke about the hyperinflation of Venezuela’s currency.  Essentially, Venezuela’s government-controlled “puppet” central bank abandoned fiscal prudence and over-printed bolivars, only to see them drop in value to being almost worthless.  That’s the bucket that cryptocurrencies fall into – a currency that isn’t controlled by any reliable entity, with utterly no mechanism to prevent its wild fluctuations in value.

In 2017, as the Bitcoin rose, many Venezuelans bought it for its perceived independence, and as a hedge against inflation.  But with Bitcoin down 80% this year, I am sure a lot of them wished they’d bought dollars, euros, or even gold instead of Bitcoins.

A cryptocurrency’s volatility is also why no sane merchant would want to accept it for their goods and services, because they’d constantly run the risk and headache of watching its value fluctuate wildly.  Beyond the hip and cool factor, which coffee merchant would want to deal with re-pricing its Bitcoin latte prices every hour?!

Perhaps now you see why Bitcoin’s been no more than a speculative instrument since its inception.

And now to the last point.  Ironically, in 2017, Bitcoin buyers started hoarding Bitcoin as an investment.  If they got their hands on it, they wouldn’t let go.  Because there are only a limited number of Bitcoins in circulation, hoarding created a supply-demand imbalance and caused its price to shoot higher and higher.

But hoarders missed the point, and hence the paradox.  Bitcoin’s value lies in its use for transactions.  If Bitcoins were actively used, and not hoarded, they’d have greater liquidity, and merchants would be more likely to accept them as currency – so they’d gain in value.  By not using them for what they were designed, crypto hoarders ended up killing the very thing they wanted to see appreciate in value.

There’s something else that Bitcoin speculators missed.  There was nothing unique about Bitcoin.  As the list on DeadCoins.com shows us, Bitcoin could easily be replaced by any other well-designed cryptocurrency.  So hoarding Bitcoins was a fool’s errand from the get-go.

Looking ahead… The early enthusiasm for Bitcoin and cryptocurrency could have led to its widespread use.  Instead, the speculator-driven mania of Bitcoin made people lose interest and set back its adoption.  I do believe Bitcoin sparked people’s imaginations, so I anticipate seeing some sort of sustainable cryptocurrency emerging in the years ahead… perhaps something that’s backed by an international consortium of trading nations, or some such.

I also know there’s a lot of money going into some very realistic applications of blockchain technology because it offers higher data security than the hackable systems we have in place today.  So watch this space for more.  And if you want to learn more about Bitcoin, blockchain and cryptocurrency’s underlying trends, visit my website, StevePomeranz.com and do a search for “Bitcoin” to see my many pieces on this fascinating but now somewhat sullied innovation.

Investing involves risk and investors should carefully consider their own investment objectives and never rely on any single chart, graph, or marketing piece to make decisions. The information contained herein is intended for information purposes only, is not a recommendation to buy or sell any securities, and should not be considered investment advice. Please contact your financial advisor with questions about your specific needs and circumstances. There are no investment strategies, including diversification, that guarantee a profit or protect against loss. Past performance doesn’t guarantee future results. Equity investing involves market risk, including possible loss of principal. All data quoted in this piece is for informational purposes only, and author does not warrant the accuracy, completeness, timeliness, or any other characteristic of the data. All data are driven from publicly available information and has not been independently verified by the author.
An investor investing in cryptocurrencies could lose all or a substantial portion of their investment. Such investments should only be considered for speculative purposes using discretionary capital. Investments in cryptocurrencies are not suitable for all investors. Further, cryptocurrency has a limited operating history or performance and fees associated with cryptocurrencies are substantial. For other information about the risk associated with investing in cryptocurrencies, please visit the U.S. Securities and Exchange Commission’s site at https://www.sec.gov/oiea/investor-alerts-bulletins/investoralertsia_bitcoin.html.
Sources: https://www.coindesk.com/price/bitcoin