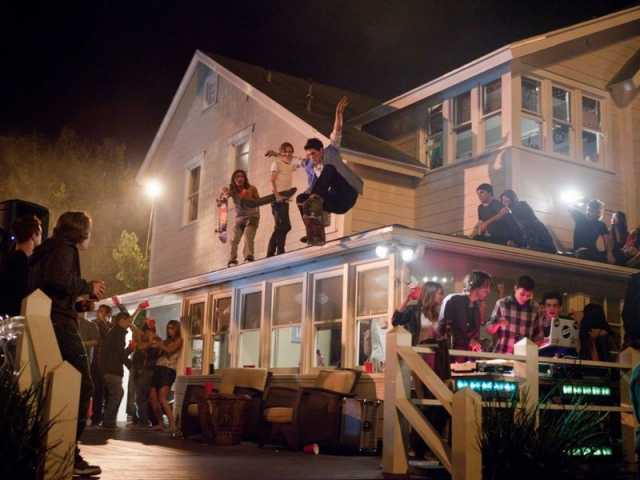 Airbnb Is Great, But Not In My Backyard

Steve opens this week’s Real Estate Roundup with the pros and cons of Airbnb, the leading online marketplace for vacation and home rentals.  Terry opines that Airbnb is wonderfully convenient if you, as a renter, are looking for fantastic short-term stays in great neighborhoods or convenient low-cost vacation rental options that give you the feel of home.  But, she continues, people get a little testy when asked, “Would you like an Airbnb in the neighborhood?”  Generally, people in residential neighborhoods do not like the idea of neighbors renting their homes for short periods to itinerant guests from all parts of the world, who come and go as they please.  As Steve puts it, Airbnb is fine but “not in my backyard.”

Terry, half-jokingly, relates the case of a friend with an Airbnb in the neighborhood where neighbors reported seeing Airbnb guests literally jumping off the roof into the pool without regard to common sense safety and strewing beer cans and trash all over the yard.  For such reasons, an increasing number of cities have taken to banning or severely restricting vacation rentals in residential zones and to fining residents who list their homes for short-term stays.  On the flip side, Airbnb does help many homeowners earn a side income while fulfilling massive global demand for non-hotel stays.  So make sure you know the laws of your city before you jump onto this bandwagon and screen your guests well so they don’t become a nuisance to your neighbors.

How Self-Driving Cars Are Making Headway

Keeping with the theme of technological innovation, Steve turns to how self-driving cars are influencing our lives.  The driverless car industry is projected to grow from $3 billion in 2015 to $96 billion by 2025 and to $290 billion by 2035.  Of all the cities openly welcoming self-driving cars, Steve notes that Detroit, the erstwhile hub of American car manufacturing, is keen on playing a significant role in the future of self-driving cars.  Terry adds Austin (TX), Boston (MA), Pittsburg (PA) and the state of Nevada to the list of places that are actively involved in next-gen cars. The country of Norway takes this up a notch for environmental reasons by subsidizing the cost of battery-operated Teslas so more Norwegians can drive green cars.

While Terry thinks driverless cars are “really cool”, she’s not an early adopter and prefers to let others go first while she waits for the second generation when most of the bugs have been ironed out.  Steve points out that self-driving cars are reportedly safer than having humans behind the wheel, just as airplanes are capable of almost flying themselves.

Steve says he’s an early adopter of new technologies and has a car with parallel park capability.  But, for reasons he isn’t quite sure about, he just isn’t comfortable letting his car do the whole parallel park thing on its own.  As he puts it, “I can’t let it do it.  I’ve tried twice now.  It backs up too fast, and I fear I might hit something.”  Terry jokingly wonders if that’s because he’s aging.

Steve Pomeranz: It’s time for Real Estate Round Up.  This is the time every single week, we get together with noted real estate agent Terry Story.  Terry is a 28 year veteran with Coldwell Banker located in Boca Raton, Florida.  Welcome back to the show, Terry.

Terry Story: Thanks for having me Steve.

Steve Pomeranz: My pleasure.  Hey, Airbnb is all the thing we all know what it is but it’s not as, what, wonderful in some circumstances.

Terry Story: A great idea when you’re traveling, and you wanna go Airbnb, and there are lots of people that do it, but not when it’s your neighbor.

Steve Pomeranz: Not in my backyard.

Terry Story: Not in my backyard.  I’ll share a story.  My assistant, she lives in a nice residential neighborhood in Boca Raton, and first of all, they’re not allowed in Boca Raton, as well as many other cities.  As a matter of fact, Miami Beach just started fining residents $20,000 for each offense, so a lot of cities are really cracking down on the Airbnb.

But to go back to the story, so it’s Thanksgiving weekend, and the neighbor goes out of town, and they decide they’re gonna rent their house out on Airbnb.  She looks out her window, and she’s got a bunch of college aged kids on the roof, and she’s like what are they doing on the roof?

She doesn’t realize what they were doing is, they were up on the roof jumping into the swimming pool.

Terry Story: I mean that’s like cray cray, and there’s beer cans all over the yard and they’re having a grand old time.

Steve Pomeranz: Yeah, I’ve seen that movie by the way.

[LAUGH]  But nobody gets hurt in the movie.

Terry Story: Right, so Airbnb is great if you’re considering renting your house out short term, just make sure that you know what the laws are of your city and town, and know that your neighbors aren’t going to like you.

Steve Pomeranz: Yeah, what’s the thought behind these cities not allowing Airbnb?
I mean, besides people jumping off roofs.  I mean, what’s the thinking here?

Terry Story: You know, well it’s probably mostly just that.  When you buy a home you expect some stability.  And if everybody’s gonna turn their home into-

Steve Pomeranz: Yeah, you got a residential neighborhood and you’re turning it into a commercial enterprise.

Terry Story: Yeah, in essence that’s exactly what it is.

Steve Pomeranz: All right, let’s switch gears here because this is kind of a topic of the day.  That self-driving cars which, obviously, are in our future, because every major technology company of note, is working on their version of a self-driving car.

But there’s some thinking that it’s going to influence real estate.  In what way, do you think?

That sounds far away but it really isn’t.  And that’s a huge growth.

Steve Pomeranz: Yeah, well that’s why these companies are so hot.

Terry Story: Yeah, exactly.  So you know what the stocks are like.

Terry Story: You can talk about them better than I can.  So here are the nation’s hot spots, that have emerged as leaders in this race to self-driving cars.

Terry Story: It’s the capital city is Kittyhawk of driver-less driving.  That’s where they first-

Steve Pomeranz: Well, the Chamber of Commerce obviously came up with this title.  They are the Kitty Hawk of driverless cars.  I can just see them in the chamber coming up with that saying.

Terry Story: [LAUGH] I know, hopefully everybody who-

Terry Story: So, Boston’s going to be doing it, Columbus, Ohio, Detroit, Nashville-

Steve Pomeranz: Well, let’s talk about Detroit, because Detroit is the home, or the hub of American car manufacturing, or at least it was, so.

Steve Pomeranz: So let’s talk about Detroit, this is where Rosie the riveter worked during World War II.  It’s where Motor City has planted it’s most significant flag, as far as cars are concerned.  But they are also putting a lot of effort into capturing and playing a significant role in the future of self-driving cars, so maybe things are looking up for Motown.

Terry Story: Yeah, when you see all these cities doing it, we know that this is definitely coming to your city soon.

Steve Pomeranz: Right, Nevada they have a Gigafactory of 5 million square feet, that pumps out batteries for its electric cars.

Steve Pomeranz: So Nevada is making some good money and they’re gonna build the infrastructure to further that.

Terry Story: Yeah they’re tremendous about it.  You know, it was funny, I was in Norway.  And in Norway, speaking of Tesla, the government subsidizes, I couldn’t understand why.  I’m like, wow, everyone’s super rich in Norway and Oslo.

And there’s all these Teslas.  Well, Norway subsidizes, the government helps subsidize the cost of the Tesla to individuals, if they buy them.

Terry Story: Extremely green.  So I thought that was pretty cool.

Steve Pomeranz: I’m gonna move to Oslo now.  If I can get a Tesla for-

Terry Story: Yeah, as long as you can deal with the cold.

Terry Story: It’s a beautiful city.  Pittsburg is another big area, Uber made a splash in September when it became the first major American company to offer urban rides to consumers, in partially self-driving vehicles, that’s kinda scary.

Steve Pomeranz: [LAUGH] But you’re comfortable with the idea of driving around, with not really having control of the wheel.  Let a computer-

Terry Story: I’ll let others go first.  I always wait for the second generation.  It’s like the cell phone.

Terry Story: Wait for the first one to come out, and then when the second generation comes out, then that’s when I’ll consider buying.

Terry Story: No, no.

Steve Pomeranz: Yeah, but I mean, the word basically is that these are safer than having humans behind the wheel.  And one thing they point to, is the greater safety we’ve seen in airplanes.

Terry Story: Absolutely.  Airplanes can land themselves.  I mean I don’t even know why we bother with pilots anymore.

Terry Story: No, we need pilots, but having a family that’s all in aviation.  I know that the planes are-

But I just think that’s gonna be a tough transition.  My car has parallel park capability.

Steve Pomeranz: I can’t let it do it.  [LAUGH] I’ve tried twice now.  It backs up too fast, I swear I’m gonna hit something, so.  And I’m usually an early adopter, so this is not really my personality, something’s going on there.

Steve Pomeranz: I don’t know what it is, I’ll go to therapy over it.  My guest as always is Terry Story.  Terry is a 28 year veteran with Caldwell Banker, located in Boca Raton, Florida, and she can be found at terrystory.com.  Thanks, Terry.