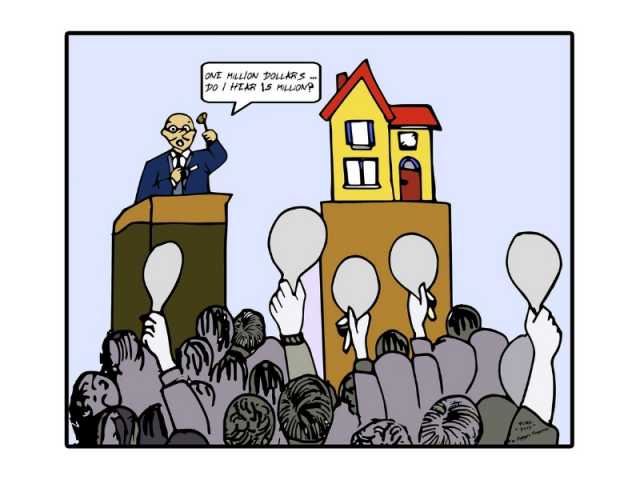 Housing Inventory Woes Could Get Worse

Terry says the problem could get worse before it gets better.  She sees large institutional investors buying up swathes of single-family and multi-family homes and turning them into rentals.  This is worsening the housing inventory crisis in the affordable sub-$600,000 price range.

Steve recalls 2008-09 when things were really rough in the housing market.  Back then, the Federal Reserve encouraged private equity (PE) firms to go out and buy people’s homes.  The Fed viewed this as a means of providing liquidity to the housing market.

PE firms, in turn, rented these homes out to their previous owners and slowed down eviction rates.  In 2008-09, this was the tonic a depressed housing market needed.

Fast forward to 2018.  With low unemployment and a resurgent economy, PE firms’ home purchases are viewed negatively.  PE firms are snapping up properties and leaving American families in the lurch.

Now, real estate investment funds, such as Amherst Holdings, have raised billions of dollars to buy single-family homes over the next 10 years, and rent them out.

Dumb Money Buying At The Peak?

These funds are boosting cash reserves in anticipation of a market decline after years of sharp price gains.  But Terry wonders where they plan to invest this money because she doesn’t see a lot of housing inventory out there.

Additionally, prices are near all-time highs.  So Terry questions the logic of buying homes at current valuations.  Steve agrees and surmises that it could be “dumb” money that’s ignoring valuation fundamentals.

If today’s PE firms lose money, they could end up selling to smarter investors down the road.

Housing markets in the West and South are declining at the highest rates and pulling down the average.  While the housing inventory shortage is boosting prices, salaries aren’t growing at the same rate.  This is throttling the market.

Terry notes that home prices jumped 6.3% year-over-year.  This is well above their historical pace.

Rising consumer confidence is a good sign for the housing market.  Consumer confidence was up strongly in August 2018.  Any time consumers are confident about employment and income, they buy consumer goods, homes, appliances, furniture, etc.

So it frustrates realtors to see low home sales when consumer confidence is high.  In parallel, there is a pent-up supply of sellers keen on downsizing.  But lack of smaller replacement homes is keeping sellers in existing homes, leaving the market in a rut.

The lack of new home construction is also keeping a lid on housing inventory.  Sellers keen to cash in on high prices simply have nowhere else to go.  So they are staying put and remodeling their homes for now.

For instance, rates on jumbo loans, which are greater than $453,000, have dropped over the past 12 months.  But even that isn’t helping this market.

Steve Pomeranz: It’s time for Real Estate Round-Up. This is the time every single week we get together with noted real estate agent Terry Story. Terry is a 29-year veteran with Keller Williams located in Boca Raton, Florida. Welcome.

Steve Pomeranz: When is 30 years going to come?

Terry Story: You know what? September, I don’t know the exact day and I know we’re in September.

Steve Pomeranz: We’ll say 30, I think it’s time for that. All right, let’s get to it. So you know how long you’ve been complaining about no inventory?

Steve Pomeranz: It’s been a long time. And yet we saw an article together which listed these big institutions that are coming in and buying up swaths of single-family homes, residential homes, and then turning them into rentals. What do you know about that?

Terry Story: Well, it’s interesting because when we were living through those years, we saw this happening.

And then all of a sudden, the inventory went away. It’s like, well, where did all these tens of thousands of homes go? Well, they were being absorbed by these large private equity firms. Now what was happening is happening again. So it’s probably contributing to part of the reasons why we have low levels of inventory.

Steve Pomeranz: Yeah, I think so.

Terry Story: And these companies are coming in and doing it again because they can.

Steve Pomeranz: Well, I remember way back when in 08, 09 and when things were really rough. Blackstone came in, and this was really, this was sanctioned by the Fed, they liked this idea.

They came in and bought homes. And then they just rented them out to those people, many who lived there initially. So it’s slowed down the eviction rate. It helped to bring capital into a depressed market.

Steve Pomeranz: And that was good. Now fast forward so many years later till today, now you have private equity firms coming in and buying huge amounts of real estate as well.

And you and I asked the question before, what real estate are they buying because there’s so little inventory to begin with.

Terry Story: Yeah, that’s what I can’t figure out. To give you an example, Amherst Holdings raised $1 billion to buy single-family homes and rent them out. And their program is going to be terms over ten years.

And the reason for the longer term is because they’re anticipating that the market’s going to decline a little bit. So they want to make sure that they capitalize on an upmarket. I personally don’t know where they’re getting the inventory from because we don’t see it out, as realtors, we don’t see it on the street. We’re begging for new inventory.

Steve Pomeranz: And you could say, well, it’s all over the country, but the bottom line is, this tight inventory is pretty much everywhere.

Steve Pomeranz: So we don’t know. But they, obviously, they’re spending the money they’re investing and maybe they know.

Terry Story: And paying high prices, ‘cause we’re towards the top of a market.

Steve Pomeranz: Well, sometimes there’s just dumb money out there. It may be institutional money, but they have their own drivers. For example, if you’re an institution, and you’re raising $1 billion for it, you’d better fill that order.

Steve Pomeranz: So you may pay prices that are well above the market, and that creates this kind of dumb money that come in. Generally, a sign of the top of the market. That doesn’t mean things are going to crash, but it means that probably people are paying too much and then the cycle’s going to turn.

Terry Story: And on and on.

Steve Pomeranz: But we have a list of four or five here that are raising 500 million and 1 billion. The Texas Retirement Teacher’s Retirement Fund is involved in one of these.

Singapore’s Sovereign Wealth Fund is involved. So we’ll keep an eye on it, and we’ll have to see, okay?

Terry Story: Yeah, I mean, that’s nothing to be shocked about.

The sales are down because, once again, I hate to say it, no inventory. And a lot of it is in the West and South. Those are the two regions of the country that are experiencing the greatest-

Steve Pomeranz: Kind of your hottest regions, really, the South and the West, yeah.

Steve Pomeranz: Up, right, they rise. So that’s what we’re seeing as well. How much have prices risen?

Terry Story: Which is a lot. It really is, so. Again, it’s supply and demand.

Steve Pomeranz: Because for years, I lived in a house that went through the cycle and my house never even went up in price. [LAUGH]

Terry Story: Yeah, my family has homes in Northern Maine and the values have been flat for 40 years.

Terry Story: Absolutely, and that’s what’s driving the market. Any time you have consumers that are very confident in their employment, in their income, they’re out buying. They buy consumer goods. They certainly buy homes, furniture. You name it, they buy it. So it’s a little frustrating to see the consumer confidence so high, yet our sales so low.

But you have to realize it’s due to lack of inventory. And it’s due to, also, pent-up supply of sellers. I can’t tell you how many sellers are out there, that would love to sell their home, but when they take a look and see what’s out there, they don’t make the move.

Terry Story: And so we’re in this vicious-

Steve Pomeranz: But why do it?

Terry Story: Why do it?

Terry Story: And I read another article that said the reason why this has all happened is because we don’t have new construction of homes.

Terry Story: Over the last decade, no new construction has really, I mean it’s there, but not like the boom.

So anyone who is thinking of moving, who wants a new this, a new that, they can’t, it doesn’t exist. So they stay where they are and redo their homes.

Steve Pomeranz: Which reminds me, I was speaking with a client the other day, and now this is just local humor but, up where I live, Gianale Homes, or one of those, builds these Valencias.

Steve Pomeranz: Right! So there was Valencia one and two.

Steve Pomeranz: It’s like will they ever run out of these Valencias? Well, I guess it’s better than naming it after some kind of Italian city.
[LAUGH] Venice or something like that.

Terry Story: Yeah, we got those, too. [LAUGH] Tuscany [LAUGH].

Steve Pomeranz: All right, and finally, this was pretty interesting. But mortgage rates which have risen over the last year, are kind of broken down into two parts. One, a conventional mortgage, a conventional loan, and the other a jumbo loan.

Jumbo loans are loans greater than $453,000. And the rates on those jumbos used to be higher but now they’re lower.

Terry Story: I know, it’s crazy. It’s hard for me to explain why, but basically, they are. Except the fact that they are. To give you an example, about 15% of the homebuyers are now taking out jumbo loans.

Steve Pomeranz: So, housing prices have gone up, too, which also means that banks are willing to lend more, etc.

Terry Story: Right, and it’s more stringent to get a jumbo loan.

Terry Story: Your credit has to be much better.

Steve Pomeranz: Yeah, okay, my guest as always is Terry Story, a 29-year veteran with Keller Williams located in Boca Raton. And she can be found at terrystory.com. Thanks, Terry.