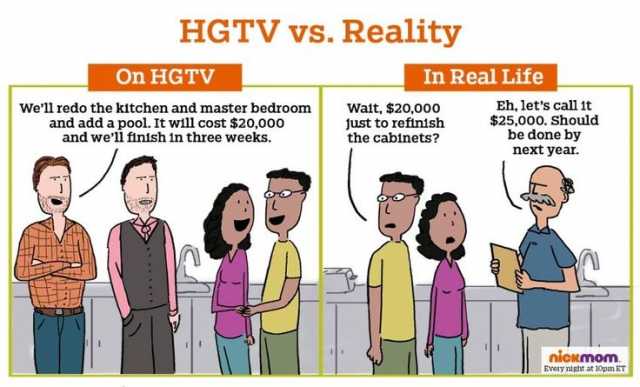 HGTV, one of the most popular TV channels, is all about today’s trend toward remodeling and renovating instead of buying a new home, which all looks very fun and easy on the screen. Someone comes in, takes the measure of things, does a little here, a little there, and you’re left smiling in the middle of your brand new living space at the end of the segment.  This is fantasy TV, says Terry, who offers some valuable advice if you’re considering such a project on your own.

Always consult with a professional before making decisions that could cost you.

We recently talked to Terry about the best pricing strategy when putting your home on the market. How to do this to your best advantage—especially considering that more and more people are checking listings online before they hit the streets—is to straddle both sides of the fence. As an example, if the appropriate value of your home is in the 190s or the 210s, placing it at $200,000 would catch both the lower and higher brackets and give you the most exposure.

Check back with us every week for Terry’s take on the current and ever-changing real estate climate.

Steve Pomeranz: It’s time for Real Estate Roundup.  This is the time every single week we get together with noted real estate agent Terry Story.  Terry is a 27-year veteran with Coldwell Banker located in Boca Raton, Florida.  Welcome back to the show, Terry.

Steve Pomeranz: There’s a huge trend today towards renovating and remodeling your home and staying put as opposed to moving to a new home.  What are some of the do’s and don’t’s to consider?

Terry Story: Wow.  Home renovation, you have all these great television shows that make it look fun and easy, and it can be done quickly….

Steve Pomeranz: In a half hour, right?

Terry Story: Yeah.  By the end of the show, your house is completely redone, and life is great.  There were no headaches along the way.  There is a big trend towards renovating homes.  Here are some things that often turn out badly.  Tearing down walls, while some walls—they look like they’re easy to tear down—you might want to bring them halfway or actually rip them out.  You need to know what you’re getting into because many of the homeowners don’t realize that they’re load-bearing walls.  They’re holding up the floors, the framework of the house, and may be full of electrical and plumbing.  Before you decide to start knocking down walls, make sure you consult professionals to see what’s the implication of taking that down.  Then, of course, there’s also municipality codes.  When you start getting into changing out electrical and plumbing and moving that around, you really need to pull permits.
Steve Pomeranz: Yeah, don’t knock out a wall if it’s a load-bearing wall, guys, okay?

Terry Story: Definitely don’t. It won’t be so pretty.
Steve Pomeranz: It’s not going to work out really well for you if you do that.
Terry Story: No. A thing to rethink is modernizing a historic house.  Removing some of the historic appeal and character of a home, such as like removing original woodwork, or built-ins, or those claw-foot bathtubs, that can be really a big mistake.  Think of it this way, Steve.  If you’ve got this beautiful historic house on the outside and then you walk in in this legal hydrocodone online modern contemporary house, it doesn’t match.  You really need to take into consideration, trying to keep the aesthetic and looks of the home.  You certainly can modernize things, but it could really …

Steve Pomeranz: I think that also … Go ahead, I’m sorry.

Terry Story: It can really affect the value of your home.

Steve Pomeranz: I think it also is pertinent to wood floors, as well.  You have these old homes …  I know in south Florida you’ve got those wonderful Dade County pine floors, and if you’re ripping that up and you’re replacing it with modern flooring, you’re going to lose a lot of value there.

Terry Story: Yeah, absolutely. These tongue and groove day pine, very expensive, and changing out for wood laminate.  Another real big mistake is to take the highest priced materials.  I’ll go into some people’s homes, and they have an absolutely gorgeous kitchen, but it doesn’t match the house.  You’re better off putting in $35 to $50 granite instead of a $100-plus marble in certain homes.  Certainly if it’s a high-end house, it should have high-end material, but to take a lower-priced home and put in material that over-improves the house, do if for your own satisfaction, but you’re not going to get it back in a resale, because an appraiser doesn’t care if you put a $50 material in or a $150 material.  You’re not going to get that value back.

Steve Pomeranz: Yeah. We’re just talking dollars and cents. Now, of course, you’re going to live there, and this is your main house.

Steve Pomeranz: Do what you want to do, but just be aware that you’re probably not going to get that money back.

Steve Pomeranz: Yeah, I know you do because when is the best time to buy a house?

Steve Pomeranz: When is the best time to sell a house?

Steve Pomeranz: Always shocking to me.

Terry Story: I love pricing strategy.  Steve, it really depends on the value of the house.  There’s a study out that claims that the 199 price would be better according to the Journal of Housing research that was done down at FAU.  Here’s the deal, 199 would be an appropriate price if the value of the home is, say, in the 180s.  Pull that number up.  Now, if the home maybe is worth 210, 220, I would argue that it’s better to bring it down and round it to that 200.  Now, there’s two ways of looking at this, Steve, that if you put the number at a whole number, 200, the majority of the buyers today are coming from the internet.  They’re doing their home searches online.  Buyers tend to buy at the top of their market as it is, so if your home is truly worth less than 200, you have the liberty and luxury of pushing that number upward, as long as it’s not 150 and you’re trying to bring it to 199.

Steve Pomeranz: Yeah. That’s a relatively new phenomenon.  The internet’s been around for a while, but it changes the traditional way of pricing things.  It seems to me that if you’re looking for a house over 200 and you see something for 199, psychologically it’s a little bit …  It represents a different kind of pricing strata for a house.

Steve Pomeranz: Psychologically it may not work.  Unfortunately, we are out of time.  My guest as always is Terry Story. Terry is with Coldwell Banker located in Boca Raton, Florida. She can be found at TerryStory.com.  Thanks, Terry.