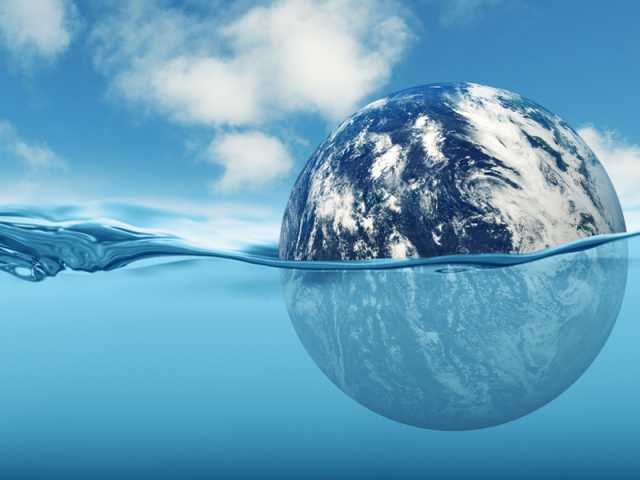 In response to Terry’s comments, Steve related a personal experience where he had decided against buying an oceanfront property largely because of concerns about possible flooding and beach erosion. He said, “I’m looking at the beach and I’ve been down in South Florida for a very long time, so I know where that beach used to be.” Terry quipped, “Just don’t get a first-floor unit, Steve. Go for a higher floor, you’ll be good.”

Steve finished that part of their conversation by noting that although 10-12% of homes in Florida are potentially affected, a lot of the climate change predictions refer to changes that may not occur until around the year 2100, almost a century from now. He said, “I really can’t think about what I’m doing next week, let alone in 2100.”

The conversation then turned to the current real estate market. Terry reported that “According to the National Association of Realtors, existing home sales climbed about 1.9% in October. Overall, sales are up about 4.6% year over year. So, we are still seeing prices rising.” Steve chimed in that, in Florida, single-family home prices are up 3.6%, year over year, and condo prices are up around 6% year over year.

Terry and Steve agreed that low mortgage interest rates are a primary reason for increasing sales and prices. Steve’s current information shows mortgage rates, as of September, averaging 3.69%. That’s down nearly 1% from the average rate of 4.54% in September of 2018. Terry stated the general rule that a 1% change in mortgage rates translates to roughly a 10% change in the home price that a buyer can afford. Steve offered an example for listeners: “Let’s take a $300,000 house. 10% of that is $30,000. So, if interest rates go down by 1%, then that means you could probably afford a $330,000 house.”

Steve next asked Terry about the new listing rules for real estate agents. Terry explained, “It all has to do with posting the listing in the multiple listing service. When an agent gets a listing, they are now going to be required to put it in the MLS system as soon as they start marketing it to the public, within 24 hours.” She added that the importance of the new rule is that, in the past, some agents have avoided putting listings into the MLS, trying to basically keep it to themselves and market it on their own. That’s bad for both buyers and sellers because buyers then aren’t seeing all the homes available and sellers aren’t getting their homes seen by all the potential buyers.

Steve wrapped up their conversation by telling listeners that, with the new rules, “There’ll be a $5,000 penalty if an agent does get caught listing off of the MLS.”

Steve Pomeranz:  It’s time for Real Estate Roundup. This is the time every single week we get together with noted real estate agent, Terry Story. Terry is a 31-year veteran with Keller Williams located in Boca Raton, Florida. Welcome back to the show, Terry.

Steve Pomeranz:  Always good to see you and have you in the studio. We want to talk about climate change and real estate because that’s a hot topic if you think about it. You’re in the real estate business, obviously, and real estate is hard assets.

Terry Story: And we’re the Sunshine State and people come down here for the climate.

Steve Pomeranz:  There was a recent study that took a look at real estate prices relative to climate change and that’s a big question in everybody’s mind, especially here in South Florida where there’s so much land on the water.

Steve Pomeranz:  And what they kind of discovered was not terribly surprising but very interesting. Do you want to take it forward or should I?

Terry Story: Sure. Sure. So basically, it all depends if you’re a believer or denier in the theory. So the way it is, if you’re a denier of climate change, homes sell in those neighborhoods for 7% more.

Steve Pomeranz:  So let’s talk about that. So if you think about it, you’re in an area that is generally doesn’t really-

Steve Pomeranz:  Doesn’t believe that climate change is real for whatever reason. So there’s nothing to worry about. So the prices are going to be higher.

Steve Pomeranz:  Because there’s no discount for the concern of water intrusion. Incursion.

Terry Story: That’s right. Now the other way around, if you’re in a neighborhood or area that’s full of believers, well, that’s going to drive the prices down. I mean, think about it. If the whole area got flooded, the prices would collapse. So it’s that fear that drives those prices down.

Steve Pomeranz:  Now I mean, I’ve noticed in South Florida, I was looking for a place on the ocean some years ago and I didn’t buy because I was worried. I know the science behind it, but I’m just a layperson. So I’m looking right in front of me. I’m looking at the beach.

Steve Pomeranz:  Looking at the water and I’ve been down in South Florida for a very long time, so I know where that beach used to be.

Terry Story: You just don’t get a first-floor unit, Steve.

Steve Pomeranz:  Is that all it is?

Steve Pomeranz:  I don’t think that’s a solution, quite frankly. So I chose not to buy on the ocean. But I don’t know that, in fact, what the story is going to be.

Steve Pomeranz:  Also, these effects from climate change are really long-term effects. They’re not, according to this article, the homes…about $882 billion worth of homes are at risk for being underwater by the year 2100.

Steve Pomeranz:  I really can’t think about what I’m doing next week, let alone 2100, but anyway, 10 to 12% of homes in Florida are kind of affected by that because we are, obviously, very high in beach-front property and the like.

Steve Pomeranz:  Okay. Very good. So what are you seeing in your marketplace?

Terry Story: I do have people concerned about whether or not the property is in a flood zone.

Steve Pomeranz:  Unless you live in Venice.

Terry Story: And I understand the concern.

Terry Story: People do ask. So I do have some certain clients that will say, “I don’t want to live in a flood-prone zone and will look at the flood maps.”

Terry Story: So we’ll avoid those communities. That’s not steering.

Steve Pomeranz:  I mean, since you don’t know, and if water levels may rise, I mean it may not be happening now, but, you know, five years from now it may be an issue. I think you’d really kind of want to know that.

Terry Story: Sure, and you should know whether or not you’re in a flood zone and what the risk is.

Steve Pomeranz:  Yeah, exactly. All right. Getting back to what we talk about a lot, like how is business, how is the real estate business? What’s the story with prices, with sales? What does it look like these days?

Terry Story: Well, according to NAR, The National Association of Realtors, the existing home sales climbed about 1.9% in October.

Terry Story: That’s sales. Well, yeah, if the number of sales are going up, there’s also somewhat of a correlation to price. Prices are definitely still rising. As a matter of fact, well, the overall sales is up about 4.6% year over year.

Terry Story: Right, so we are seeing prices still rising.

Steve Pomeranz:  So the trends are higher sales and higher prices still. And I guess the reason is that mortgage rates-

Steve Pomeranz:  Yeah, more demand, lack of inventory still. Now according to this document here, the fixed mortgage rates in October rose to 3.69%, still incredibly low, up from 3.61% in September, but versus 2018-

Terry Story: Yeah, the interest rates are so attractive.

Steve Pomeranz:  And what’s the rule? 1% move in interest?

Terry Story: In price fluctuation. So if there’s a 1% change in interest rate, you’re looking at $10,000, based on a medium-priced home.

Steve Pomeranz:  All right. There’s also a new change. We don’t have a lot of time here, but there’s a change in listing practices by agents. And I want to go over this quick.

Terry Story: Okay. Real quick. It all has to do with posting the listing in the multiple listing service. So when an agent gets a listing, they are going to be required to put it in the MLS system as soon as they start marketing it to the public, within 24 hours.

Steve Pomeranz:  Okay, why is that something special?

Terry Story: Well, why it’s special is because agents have been holding back, putting it in the MLS, marketing it. Trying to get their own buyer, if you will.

Steve Pomeranz:  Well, how are they marketing it?

Terry Story: They can do it through Facebook, social media. They may use portals, different portals that they’re able to disseminate the information, by-passing the MLS, which really isn’t good for the whole real estate industry.

Steve Pomeranz:  Yeah, because you’re not seeing all the houses that are up there and, actually, the seller isn’t really getting access to the complete correct population of buyers.

Steve Pomeranz:  But there are some sites which do specialize, let’s say, in the very high end where perhaps a client’s a famous person and they want to keep it private.

Steve Pomeranz:  But no longer. Well, there’ll be a $5,000 penalty if an agent does get caught in listing off of the MLS, that’s important.

Steve Pomeranz:  Okay. My guest, as always is Terry Story, a 31-year veteran with Keller Williams located in Boca Raton, and she can be found a terrystory.com. Thanks, Terry.