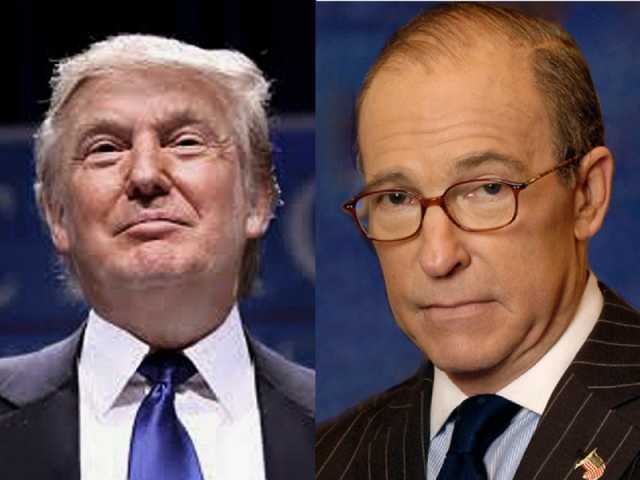 Although I have interviewed many successful company executives of the past 17 years, it’s not often that one of my interviewees become President Trump’s Top Economic Advisor. I interviewed Larry Kudlow back in 2014, so I decided to re-listen to the interview and see how it stacks up to the present day.

So, here are select snips of the interview along with my commentary and a fuzzy rating system of what he got wrong, what he got right, and what we can’t tell just yet.

To begin, remember this was 4 years ago. I asked him about the economy which was showing some good signs of growing out of the 2008 recession but was not growing as fast as he hoped.

Here’s what he said:

Larry Kudlow: Well, I think there are a number of reasons, some of which relate to the Charles Koch editorial in the Wall Street Journal.

Let me interrupt a bit. I read the Charles Koch article and in it, Charles Koch made his case for free-market capitalism and his concern about heightened government intrusion in our daily affairs.

Larry Kudlow:  In my view, we need a lot more free-market capitalism. We need a lot more tax reform. We need to get rid of Obamacare, in fact, across the board, we need far fewer regulations. I think business is so uncertain, they don’t want to invest long term, even though they are profitable. And I think the labor market situation, when you look under the hood of that 6.7% unemployment rate, you see some very negative aspects, not least of which is extremely low wage increases. The participation has slumped; people have dropped out of the labor force. Businesses don’t want to hire the way they used to because they’re worried about what Washington’s going to do to them. So, I think there’s a lot of issues here. I don’t see…I mean some of my friends and people that I’ve interviewed and some of the regulars on our show believe there’s a big growth breakout coming.

I don’t see it. I think we’re hovering around 2.5%, which is pretty much been the case really for this whole recovery. I think the average growth is 2.4% at an annual rate, that’s half of the post-World War II recovery rate. And the labor story on jobs, did I just read them? The jobs recovery, so-called, is the worst, lowest since the Bureau of Labor Statistics started counting in 1939. So, I think you’ve got some very serious problems out there.

Okay, to restate: He wants a lot more free-market capitalism and a lot more tax reform. My grade? He got that right. The Republican mantra is lower regulation and they just passed a huge tax reduction bill.

His comment on employment and the slow rate of wage increases: He got that right.  Low-wage increases continue to this day.

On unemployment: He got that dead wrong, he mentions 6.7  unemployment back then; it’s now at 4.1

Slow GDP growth: He got it right. Growth is still slow but beginning to pick up, albeit slowly.

So, then I asked him that with an economy so large, so international, and so strong, how much does government regulation really impact growth. Here’s what he said:

Larry Kudlow: The resiliency of our capitalist system and the resiliency of business is what’s getting us growth at all. That’s the key point. And the way I would characterize it is that we’re growing at this rather modest rate of, let’s call, 2.5% in spite of Washington, not because of Washington.

And quite unlike my tenure—I mean, I was Associate Director of Office of Management and Budget under Ronald Reagan—Mr. Obama is regrettably anti-business, and he is anti-entrepreneurial, and he’s a very big government man. And as Charles Koch put it very well, this is the essence of big government and collectivism. And if you’re a businessman or businesswoman, large or small, you have to be conscious and aware of what’s coming down the road from Washington, which is taking a bigger and bigger role, regrettably, in our economy.

So, one thing that troubles me enormously in this sense, is that a lot of American businesses are going offshore. And they find many offshore locations to be more hospitable to business, more hospitable to investment, and more hospitable to the tax treatment of profit. And I think that’s one of the things affecting the weak labor market recovery.

People don’t like to talk about this and, of course, Obama, and I’m very critical of this, he wants to penalize businesses who are offshore, even though it’s his policies, in many cases, that are driving them off-shore. We’re not repatriating capital the way we should be, which could provide tremendous investment impetus.

So, you know, these are some troublesome developments, and they need to be corrected in my view. We ought to be growing; from a deep recession, we should have been growing at 4 to 5% these past five years. That was basically the rate of the Reagan recovery which was from a deep, deep recession also.

But I think his actions—again we are going back to Charles Koch—his actions on big government collectivism are a negative.  They are blunting the animal spirits of the US.

Blunting The Animal Spirits Of The US

First, I don’t think you can say that Obama was anti-business. His administration was trying to correct some of the excesses that caused the great recession. Perhaps they went too far, that’s not for discussion here, but I think saying he was anti-business, pigeon holes Obama unfairly. We need to keep the discussion fair.

As far as Larry’s thoughts on Obama policies negatively affecting the weak labor market—dead wrong. The unemployment rate, as I had said before, has improved despite Larry’s argument to the contrary

Repatriation of capital that he mentioned, well, that’s money that has been earned overseas and has stayed there. Well, he’s dead right. Lower taxes is leading companies to bring their money back to the US. However, I could find no real statistics to say whether companies are coming back to the US. It’s called Reshoring, the opposite of offshoring. Reshoring is bringing the money back here, and I just think it’s too early to tell.

Larry Kudlow: But I think his actions—again we are going back to Charles Koch—his actions on big government collectivism are a negative.  They are blunting the animal spirits of the US.

“Blunting the Animal Spirits of the US”. The term “animal spirits” was coined by John Maynard Keynes, the great economist, in his General Theory Book in 1936 and it refers to the spontaneous urge to action, as opposed to the lacking of desire which recessions can bring on which leads to inaction. I think we can say that animal spirits have definitely been lifted nowadays. Companies are investing more, hiring more, and the stock market has risen anticipating higher future growth in earnings.

My next question addressed the inequality between the very wealthy and the rest of society, and I asked whether the free market system was supposed to correct that inequality on its own. I said, “The system itself would right itself, is that correct?” Well, he didn’t answer the question, but toward the end of his response, he said something noteworthy. We’ll play it for you.

Larry Kudlow: It’s government control and interference and regulations versus a free-market economy. That’s what’s going on and one of the reasons I’m a long-run optimist is I believe in our great system of democracy, and I think at the end of the day, the voters will see their way clear towards a less onerous government and a more vigorous private sector.

Well, actually it happened in 2016, so I will give him a dead right on this one. The political winds did result in a sea change two years later.

So ends my re-visit of my interview with Larry Kudlow, who back then in 2014, was CNBC host and now today is the Director of the National Economic Council or, as the media has put it, the President Trump’s Top Economic Advisor.

If you have any comments or questions, we’d love to hear them!

The opinions expressed are those of the interviewee and not necessarily United Capital. Interviewee is not a representative of United Capital. Investing involves risk and investors should carefully consider their own investment objectives and never rely on any single chart, graph or marketing piece to make decisions. Content provided is intended for informational purposes only, is not a recommendation to buy or sell any securities, and should not be considered tax, legal, investment advice. Please contact your tax, legal, financial professional with questions about your specific needs and circumstances. The information contained herein was obtained from sources believed to be reliable, however their accuracy and completeness cannot be guaranteed. All data are driven from publicly available information and has not been independently verified by United Capital.