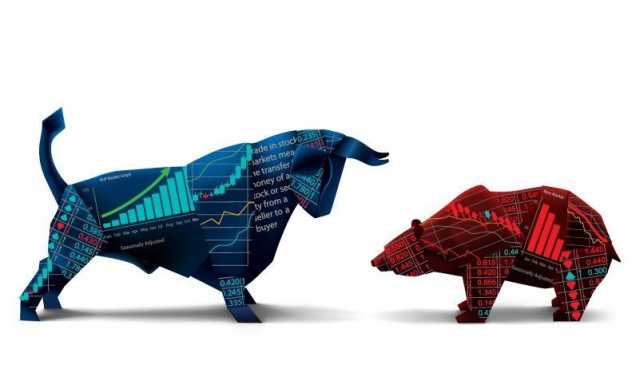 He should know. He’s been studying and analyzing them for years.

Steve and Sam discuss the current 84-month-old bull market, which he describes as being a bit long in the tooth and beginning to show its age.  As Stovall points out, the average length of a bull market since WWII has been 56 months, that’s about 5 years. The current bull market is almost 7 years and has been exhibiting signs of instability.

Unlike predicting volcanic explosions from seismic monitors, bull market volatility is not so easy to assess. The shifts and blips that occur sometimes simply mirror the nervousness of investors reacting to what is perceived as ‘the end.” At the 7-year point of this current bull market, for instance, we’ve had about 50% more 1% moves daily, signaling that investor’s anxiety.

Trying to predict these changing markets has resulted in some interesting, if not, reliable theories. There’s the Super Bowl theory which correlates a win of an AFC team with a bear market and that of the NFC with a bull market. And then there’s the questionable legitimacy of linking the market phase to the Chinese lunar year, which at times does seem to show correlation. However, none of these theories has shown causation.

Those factors that do actually impact the market historically are such things as the uncertainty around presidential election years when a sitting president has served out his two terms—the situation we’re in at the moment—and the Federal Reserve raising interest rates.

Steve asked Sam how the last bear market of 2007 to 2009 compared with other mega-recessions we’ve had, those of ’73 and ’74 and of 2000 through 2002, for instance, when it took five years to arrive at the break even point.  Because of the Feds pumping liquidity into the marketplace, Sam explained, we actually got to that place a year earlier the last time around.

Reflecting back to the bear market that dragged on for a long time after the”73/’74 recession, Steve commented that it wasn’t until interest rates went down in the early ‘80s that the real bull market came in. How does this period relate to future indicators?

Sam feels that when the next bear market does come, it’ll come in as a gentler more garden-variety bear market, which he says is a normal and necessary part of the healing and resetting of the dial. As always, Steve’s advice is to not panic and to listen to the experienced voice of your investment advisor.

Steve Pomeranz: It’s always a pleasure to welcome my next guest. He is Sam Stovall, Managing Director of U.S. Equity Strategy of S&P Capital IQ’s Global Markets Intelligence Group and Chairman of the S&P Investment Policy Committee. Sam has been a friend of the show for many years. I always look forward to his insights. Welcome back, Sam.

Sam Stovall: Good to be here. Good to talk to you, Steve.

Steve Pomeranz: In some ways we seem to be experiencing an aging bull market. As you wrote in one of your recent columns, bull markets are like humans: They get increasingly unstable as they age. Give us some indication of the length of this current bull market and its increasing instability.

Sam Stovall: This bull market possibly celebrated its 7th birthday on March 9th. The reason why I say possibly is because we will need to set a new all-time high sometime in the near future or, at least, before we slip into a new bear market by falling 20% or more. That’s because the prior all-time high occurred on May 21st of 2015. If we don’t hit an all-time high before slipping in a new bear market, then know that the bull only lasted six years and two months.

Sam Stovall: If we do set a new high, then we can say we did celebrate seven years.

Steve Pomeranz: Any idea what that number is on the S&P on May 21st?

Steve Pomeranz: Okay. Interesting. If we are in fact in an aging bull market— and we have seen volatility pick up in recent months—how does this compare to other bull markets of, maybe not this old because this is a pretty long one, but of the average of others?

Steve Pomeranz: How long was that? Do you know off hand?

Sam Stovall: That was 113 months, just about six months shy of its tenth birthday.

Steve Pomeranz: Wow! That’s pretty amazing. Does rising interest rates, especially from the Feds desk, does that increase the volatility as well, or has it increased it in past markets?

Steve Pomeranz: I guess the question though is does this volatility portend a coming bear market? Is it a timing mechanism for a bull or bear market?

Sam Stovall: No, I find that increased volatility just means that investors are nervous and, like hyperactive first graders playing musical chairs, they’re trying to out-anticipate the others as to when the music will stop. Unlike volcanology, trying to figure out when a volcano will explode, you can’t really use increased seismic activity and say “Okay, here it comes”. Many times you can have increased volatility and have it really only be coincident with the beginning of a bear market. I find that a really sharp increase in volatility is a better indicator that the end is near, meaning the end of the bear market, not the end of the bull market.

Steve Pomeranz: Interesting. I think we should rely on some more important theories, for example, the Super Bowl theory, which says that if an AFC team wins, then you’re going to have a bear market; if the NFC Conference wins, it’s going to be a bull market. You have actually done a little bit of work comparing it to the Chinese lunar year market and that seems to be kind of accurate. With all due respect to our wonderful statisticians out there, including yourself, how does the lunar market actually, what does it predict?

Sam Stovall: I think that what it shows is that you can find a variety of things that will show a pretty tight correlation to the stock market, just makes sure that there’s correlation with causation. With the Super Bowl theory, no, there’s no causation. With the lunar Chinese New Year, there really is no causation here either. Going back to World War II, I found that the year of the monkey, which is the year we’re in right now, the S&P gained an average of 7.8% versus an average for all years of about 8-1/2%. We actually had a sub-par performance. What was even better was, that in the year of the monkey, it always went up, meaning the frequency of advance was 100% versus only 70% for all years since World War II.

Steve Pomeranz: Based on the way this year has started, I’m not that sure that the year of the monkey is going to play out this year. What do you think?

Sam Stovall: I think there are a lot of other things that are more likely to cause investors a bit of agita. One is that we are in a presidential election year. There have been five times since World War II that the market has actually been in that presidential election year which wreaks with uncertainty because the sitting president is not allowed to run for re-election or in the case of Harry Truman or Lyndon Johnson chose not to run again, so whoever wins the presidency will be an unknown quantity. Untested, if you will, in the White House. That’s uncertainty that investors don’t like. As a result, the market has declined an average of 3.6% in that presidential election year when you do not have a sitting president.

Steve Pomeranz: The question is, and I’m not going to expand on this any further, I promise, is how many of those election years were in the year of the monkey? Do not answer that question. That seems to be the most logical next question. You look a lot at the historic average.

By the way my guest is Sam Stovall, he is the Chairman of the S&P Investment Policy Committee.

Sam, you look at a lot of statistics and you look at averages in the variation from the averages, but we just went through the great recession, the great bear market of 2007 to 2009, are things perhaps different this time? How does it compare to other mega-recessions that we’ve had?

Steve Pomeranz: After ’73 and ’74, that terrible bear market, as you said it took about five years to get back, something like that? The rest of the ’70s were not all that good, but in, I think it was September 1980 or so, maybe it was ’81, the interest rates started to come down and the official real bull market lasted for the ’80s and so on. This time around in the decade of the 2000s, we had really two of these major bear markets almost back to back. I think that’s hurt returns for the last ten years. Does that say anything about the future?

Sam Stovall: It certainly indicates that we are in times that could be compared to the 1930’s, in that we did have not only two mega-meltdowns, but three from 1929 through 1942. I don’t think we are going to end up having a third mega- meltdown; but, sure, a more garden-variety bear market, as I like to call it, is likely. We’ve gone, as I mentioned, seven years since then and normally it’s less than five. Bear markets are a normal part of the healing and the resetting of the dial process.

Steve Pomeranz: You have to feel the pain in order to become healthy once again, and that’s what these economies do. That’s why stock market investors should be patient and know the cycle is coming and not freak out every time it comes as if it was something brand new. It’s been going on since we’ve been keeping score. My guest, Sam Stovall, Managing Director of U.S. Equity Strategy for S&P Capital IQ Global Markets and Chairman of the S&P Investment Policy Committee. Thanks once again Sam, so informative.

Sam Stovall: My pleasure, Steve. Good to talk to you.